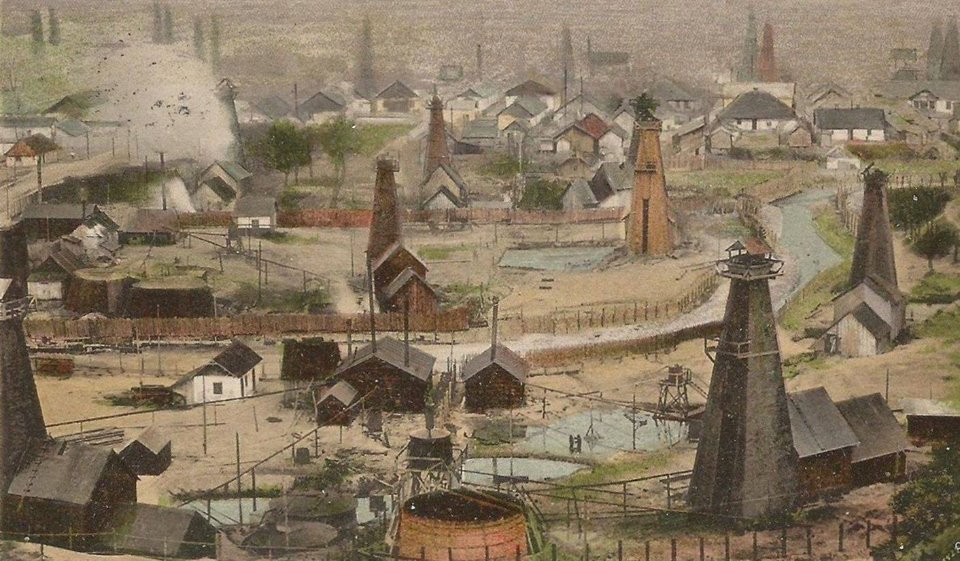 We want to bring some of them closer to you by the "Project stories" - the cycle which presents their more human (but also animal - as in the 1st and 13th episode) dimension of our selected projects. We invite you to read!

Did you know that oil extraction in Galicia once ranked third place in the world? Did you know Boryslav ozokerite was used to insulate the first underwater transatlantic telegraph cables between Europe and the United States? Did you know a small town of Boryslav used to have its own British Consulate? Did you know Rockeffeller and Nobel owned several oil wells in Boryslav?

Today’s Boryslav is not what it used to be - a depressive post-industrial town with oil facilities located everywhere next to dwelling houses, with a few old villas which have seen better days. The water is polluted by oil and methane is another threat to people’s lives and health. Although oil extraction is insignificant these days it still constitutes 80% of the town’s income. Labour migration has increased strongly during recent two decades.

Albertyna Buchynska devoted her life to the study of the Earth - Geology. She was born in Stebnyk, a small mining town in Lviv oblast, she was a part of this environment from early childhood. However, her occupations were not limited to science or industry - she initiated many projects and was involved with various activities popularizing geology among the wide audience, such as Geotourism trips in Western Ukraine, Geology classes for children, to name just a few. The aspect of people’s relations with the Earth is the most fascinating to her.

“These stories are something I love more than pure science” – she confesses.

As a coordinator of Oil Cradle project, Albertyna is working now on the promotion of the towns, which have much in common with her native place. Sanok in Poland and Boryslav in Ukraine, both once rich and vibrating oil cities, changed dramatically as their most important resources drained out. But they still have something valuable to offer – their history.

Tourism can become a chance for survival of such cities – destroyed and unique at the same time. No doubt, geology and industrial heritage are the most important assets:  like nowhere else in Ukraine, oil wells, both old and new, are a part of todays’ cityscape, including a famous №298 (Oil City) well. Today, the task is to make it also a good place to live, to make local people aware of their past and committed to its future. This is something the OilCradle project team is positive about.

Boryslav has even more to offer - you can visit Jan Zeh’s pharmacy and buy a tiny bottle of oil as a souvenir. There are beautiful old churches, in particular, St. Anna’s church, which is an important pilgrimage destination. The city park has been recently renovated and has many sport and recreation facilities including the largest open-air workout gym in Western Ukraine, a rope park and a lake. There is even a children’s playground built in the shape of an oil pump!

Lives of many prominent people are connected with this town including Ivan Franko, who portrayed the life of local workers in his classical novel “Boryslav is laughing”, an Ukrainian-Brazilian poet and translator Vira Vovk and a French film director Maurice Regamey. The town’s location in the outskirts of the Carpathanian mountains is excellent for active tourism, a newly built ski facility called Bukovytsia making it even more attractive in wintertime. Close neighbourhood to SPA resorts of Truskavets and Skhidnytsia, to ancient fortress Tustan and a historical town of Drohobych makes it a must visit place for everyone exploring this part of Ukraine.

The challenge is to make this town visible, to make people speak about it.

By erecting monuments to Jan Zeh in Boryslav and Ignacy Łukasiewicz in Strachocina near Sanok, the OilCradle project is going to bring back memories of legendary creators of kerosene lamp and pioneers of oil extraction, who deserve due recognition and should be commemorated in historical “oil places”. The monuments will become new landmarks on the tourist maps of the towns. Remarkably, a kerosene lamp was chosen for the project logo as it marked an important milestone of the town’s development. Kerosene from Boryslav lighted the houses all over Europe, kerosene lamp is now one of the Lviv symbols due the fact it was actually invented there. It proves that the history of science is not boring. It was created by live people and it once made a huge impact on everyday life.

“Interestingly, the posts about the past of the Boryslav, with black and white photographs that we publish on our Facebook page draw people’s attention and often provoke discussions. It means people are really interested in their town’s history.”

Albertyna’s vision of the future of the towns is optimistic. She can see positive changes, which has taken place recently and working on new projects and initiatives. Besides, the local community is quite active and committed to the towns’ development.

“I feel proud for being able to contribute to the development of this amazing place.”

If you want to learn more stories about the glorious past of Galician Oil Cities and get fresh updates on project implementation on both sides of the border, subscribe to its Facebook account and its other accounts in social media

More about the OilCradle project can be found here.