The cross-border projects are not just indicators, budgets, reports and payments. Although these are their inseparable elements, above all each project hides the specific ideas, values and dreams of people implementing it, as well as the stories of those who benefited from its implementation.

We want to bring some of them closer to you by the "Project stories" - the cycle which will present this more human (but also animal - as in the 1st episode) dimension of our selected projects. We invite you to read.

Why don’t we stop for a while, it’s time for dinner. Let’s eat before it gets cold!

– Yaroslava hurries us up. She is impatient because our discussion has taken too long. In the twinkle of an eye the table is covered with an embroidered tablecloth and the dishes start appearing. Their names sound unfamiliar to most of us - “oshchypok”, “knysh”, “machanka”, “tarchanyky”, “liutyi syr”, “kyselytsia”. The feast begins and for quite a while everyone is silently enjoying their meal. Then we start talking, complimenting the hostess for her cooking, discussing the dishes and recipes. Amazingly, even traditional “pyrohy” taste differently with soft, melting dough, dark with rye flour.

Yaroslava’s face is shining with pleasure and pride. It is like something significant is taking place in her house in the moment.

It has always been important for my family to have good food in our house. Even if the life was hard at the times, both parents working all day long in kolkhoz and around the house. My grandma was the one who did all kitchen magic. She often sang while cooking and you know what? Some of the songs were about food, about our traditional dishes, as the one about two girls who were discussing their cooking on the way to village dances.

The nature and the years of turbulent history were not too kind to Boykos, the Carpathian ethnic group, now inhabiting mountainous areas of three Ukrainian oblasts and Podkarpackie voivodeship in Poland.  Mountains, mean soils, scarce land plots and harsh weather most time of the year are signature features of areas where Boykos live. They had to create their authentic food culture based on what their land gave them: mostly potatoes, cabbage, beans, peas, rye and oats (for wheat would not grow here), flaxen oil, essentially dairy products (including cheeses), occasionally meat, including game. All that enriched with local dainties – forest mushrooms, fish caught in the mountain rivers, berries and herbs. Simple as they were, these products gave way to fantasy of local people, who became masters in making cheeses and preparing meat dishes (especially smoked meat). They know how to cook a great variety of mushrooms, their recipes of potato and cabbage dishes are countless, same as their bakery and desserts made with the addition of honey, hazelnuts and blueberries. These meals are not only delectable, but they tell the story of this land, its people and traditions. Food culture is an essential part of Boyko folklore with special dishes served only at particular holidays (like “kerechun” on Christmas Eve), food and kitchen rituals, numerous food-related superstitions and finally, songs mentioning the traditional dishes.

Our children are dying for pizza and burgers and many of my friends are really into modern cosmopolitan cuisine, always eager to try exotic products and follow fashionable food bloggers. But one day we bring them to the Carpathians, they try local home-cooked dishes and their approach changes. They discover something new and they want to explore more.

We wanted to make Boyko Cuisine popular because local food is an essential element of each travel experience; it’s also a great way to diversify tourist offer and generate possible source of income for the locals. But personally I believe that culinary heritage is valuable for its own sake and it deserves to be integrated in our daily lives being both healthy and affordable.

The project team is now collecting old recipes and related information to compile a cookbook. The recipes are also posted regularly on social media: Автентична Бойківська кухня/Kuchnia Bojkowska (Facebook) and @mountain_taste (Instagram). This year the partners from both countries plan to organize a culinary festival, where Boyko housewives will treat everyone with local specialties.

Of course, in the work we do, the experience and skills of the people who continue the tradition, are priceless. Such people, Boyko men and women, are our stars.

Yaroslava Petrykiv, or just “Pani Slava”, one of such “stars”, seems to be the one with the nature-born gift for cooking. She did not hesitate about which profession to choose after secondary school – she was trained as a cook in a vocational school and worked at canteens and cafes. Even when she didn’t have a regular job she was able to earn her living cooking at weddings, growing and selling strawberries. Then, one day she was offered to organize “Boyko dinners” for tourists. The offer came from a guide, who took people from Lviv and Truskavets spas for short trips to the Carpathians. It opened a new page in her life. She has had guests from all over the world since then. The dinners turned into little shows with music, singing and laughing. As her “parties” grew more popular she became aware how valuable is her knowledge, her memories and skills. But also, how important is common eating.

Sometimes I can see tears in people’s eyes.

It occurred to me that large family gatherings, when people can eat, talk and sing together are quite rare nowadays. In big cities people sometimes live without even knowing their neighbors. Elderly people are often lonely, their children always busy at work. They don’t have many chances to gather at a table have a good laugh and sing together. This is something we give to the people. They come home with our recipes and our songs, taking a part of the Carpathians with them!

Although the project is covering all parts of Boykos’ residence in Ukraine and Poland, the project team decided to hold the major activities in Dovhe village of Drohobych raion, which is a bit off the beaten track in the Carpathians. They wanted to promote these less touristic but extremely interesting places with beautiful nature and living spirit of the past, to enrich the experience of visitors with tasting traditional Boyko cuisine and to encourage local housewives, farmers and small producers to make full use of their talents.

Thanks to the financial support of the European Union, the project titled “Reproduction and preservation of culinary traditions for the promotion of cultural heritage of mountainous cross-border region” is being implemented within the Cross-border Cooperation Programme Poland-Belarus-Ukraine 2014-2020. 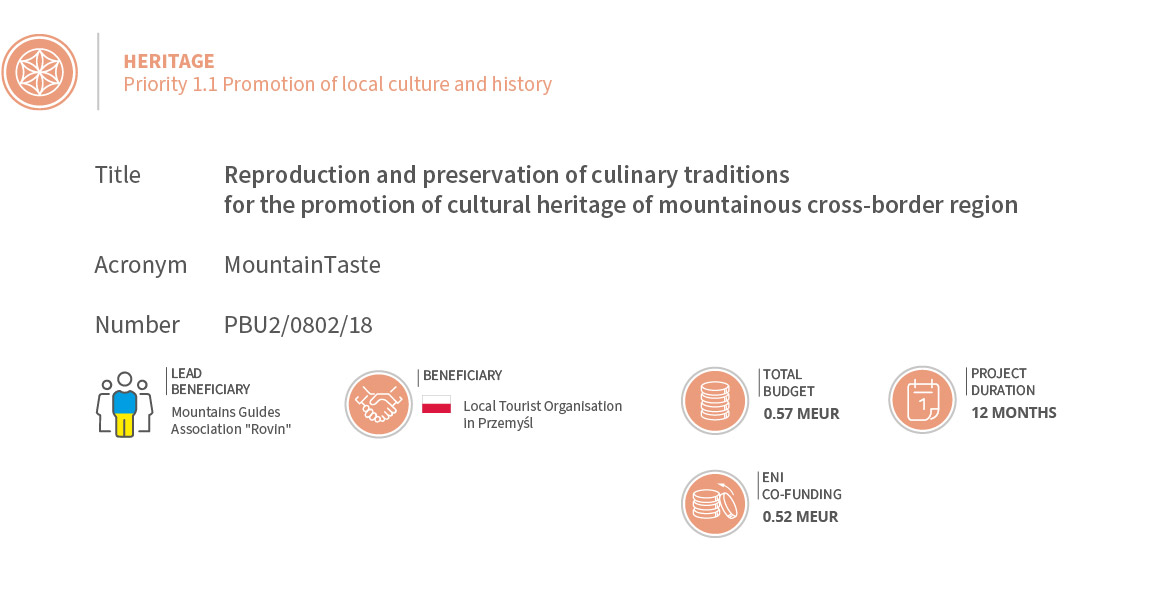